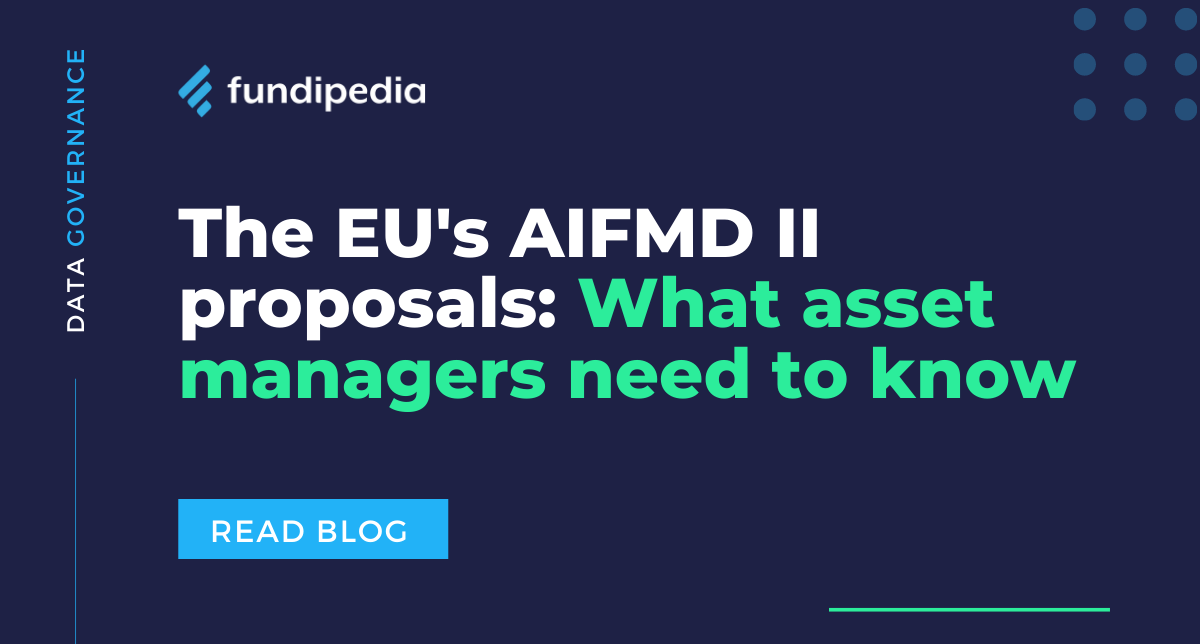 It may have taken the best part of four years — the directive was due for review in July 2017 — but the EU commission has finally published its proposals for reforming the Alternative Investment Fund Managers Directive, or AIFMD.

And while many in the industry were expecting a radical overhaul, the proposals are surgical. Which is to say they’re limited in scope but fairly significant.

So what is the EU Commission proposing?

And what are the implications for asset managers, should these proposals become law?

The story so far: A quick refresher on the AIFMD

Like many regulations that came about in the 2010s, the AIFMD was introduced to protect investors and promote market stability in the aftermath of the global financial crisis. But where laws (such as the UCITS directive) regulate products, the AIFMD regulated fund managers themselves.

To say the industry wasn’t pleased is the one of the biggest understatements you’ll hear read in 2022. The directive was difficult and expensive to implement. Fund managers argued it would only lead to a modest improvement in investor protection at a disproportionate cost.

As it turns out, the AIFMD did, in fact, reach the goals the EU Commission had set out for it. A report from KPMG, who were brought in to assess the directive’s effectiveness, concluded that:

‘AIFMD has played a major role in helping to create an internal market for AIFs… Most areas of the provisions are assessed as having contributed to achievement of the general, specific and operational objectives, to have done so effectively, efficiently and coherently, to remain relevant and to have … added value.‘

That said, the report also identified some areas that weren’t working as intended or even hampering the AIFMD’s goals, particularly — and unsurprisingly, given the fund management industry’s reaction — when it came to efficiency and effectiveness.

What are the EU Commission’s AIFMD II proposals?

Using KPMG’s report as a starting point, the EU Commission reviewed the AIFMD to see what needed improvement, what wasn’t working, and what needed updating.

Here’s a look at the key changes being proposed and the implications for fund managers.

The EU Commission is particularly concerned about potential issues arising from over-delegation and differences in approach between EU member states.

As a result, it has made several far-reaching proposals, including:

Should these proposals become law, it’s likely that many delegation arrangements will need to be re-papered.

The European Securities and Markets Authority plans to conduct biannual reviews of the measures national regulators are taking to prevent ‘letter-box’ entities. The aim is to eventually harmonise the approach across the EU.

Under the proposals, any fund would need to be run by at least two, full-time, EU-resident natural persons — a lower standard than those prevailing in major jurisdictions like Luxembourg.

Every fund manager would also need to provide regulators with:

Word on the street is that the EU Commission already has draft technical standards detailing these requirements, but nobody has confirmed.

There are five key proposals in this area:

Under the proposals, alternative investment fund managers that manage open-ended funds would, in exceptional circumstances, be able to temporarily halt repurchases and redemptions.

Regulators would also have the power to halt (or resume) repurchases and redemptions for investor protection or financial stability reasons, including if the firm is in a non-EU jurisdiction but marketed in the EU.

Firms would also have to choose at least one additional liquidity management tool from a list in new Annex V. They’d need to put in place comprehensive policies and procedures detailing when — and how — they’d use the tool and notify regulators of their intention to use or stop using them.

In an unusual move, the proposal here would relax, rather than tighten requirements.

Where, at present, depositaries have to be established in the same member state as the relevant alternative investment fund, this will no longer be necessary under the new rules. The aim is to replace the requirement with a passporting system.

Under the proposals, they’d be treated as delegates of the depositary and, consequently, be subject to the custody delegation rules should they be providing custody services.

If acting as an issuer, the depository is exempt from the requirement to exercise due skill, care, and diligence when selecting them. Central securities depositories are regulated in their own right.

The Commission is proposing three changes to investor disclosures.

In the case of open-ended funds, the liquidity risk management disclosure would also have to include information on the possibility and conditions for using liquidity management tools.

Some (though not all) of this might already form part of quarterly investor reports.

In an effort to beef up anti-money laundering and tax compliance, the Commission is proposing replacing the NCCT — the requirement for non-EU alternative investment fund managers and non-EU alternative investment funds not to be established in jurisdictions the Financial Action Task Force considers non-cooperative — with a requirement that they mustn’t be established in jurisdictions identified as high risk under the fourth money laundering directive.

These jurisdictions, which now also include the UK:

The agreement must comply with article 26 of the OECD Model Tax Convention on Income and on Capital and ensure effective exchange of information in tax matters.

Because none of the major non-EU fund managers and funds are on the EU’s list of non-cooperative tax jurisdictions nor are they identified as high risk under the money laundering directive, this change is unlikely to cause problems.

That said, it doesn’t have a transitional or grandfathering provision. So there’s uncertainty about what would happen if a major jurisdiction ended up on either list.

Alongside the changes we’ve just discussed, there are also a number of proposed changes to the UCITS directive. These are mainly so alternative investment funds and UCITS are treated in a similar way, and they mirror the AIFM proposals on:

The EU Commission is also proposing the relaxation of central securities depositories rules, and a requirement for UCITS management companies to report regularly on the markets and instruments in which they trade. As under the AIFM proposals, the technical standards are yet to be developed

Looking ahead: What’s next for AIFMD II?

The fund mangement industry’s reaction to the AIFMD II proposals has been surprisingly positive so far. And yes, that’s us taking ‘not the car crash everyone was expecting’ as a win.

Before a new directive sees the light of day, EU member states’ regulators will discuss the proposals in detail, and there will likely be changes as a result.

In the meantime, it’s a good idea to prepare.

Should the proposals become law, they’ll likely increase the volume and complexity of reporting requirements — particularly when it comes to investor and regulatory disclosures. Which is why it’s critical to have robust data management technology in place.

At Fundipedia, we’ve designed a comprehensive platform that gives you end-to-end control over your data and its accuracy from sourcing to dissemination, automatically updating reporting templates so you’re always using the right format.

Regardless of what technical standards the European Securities and Markets Authority decides to put in place, don’t get caught out.

Let’s show you how we can help you stay compliant with minimal effort.