Q&A with the Fundipedia Developer Team 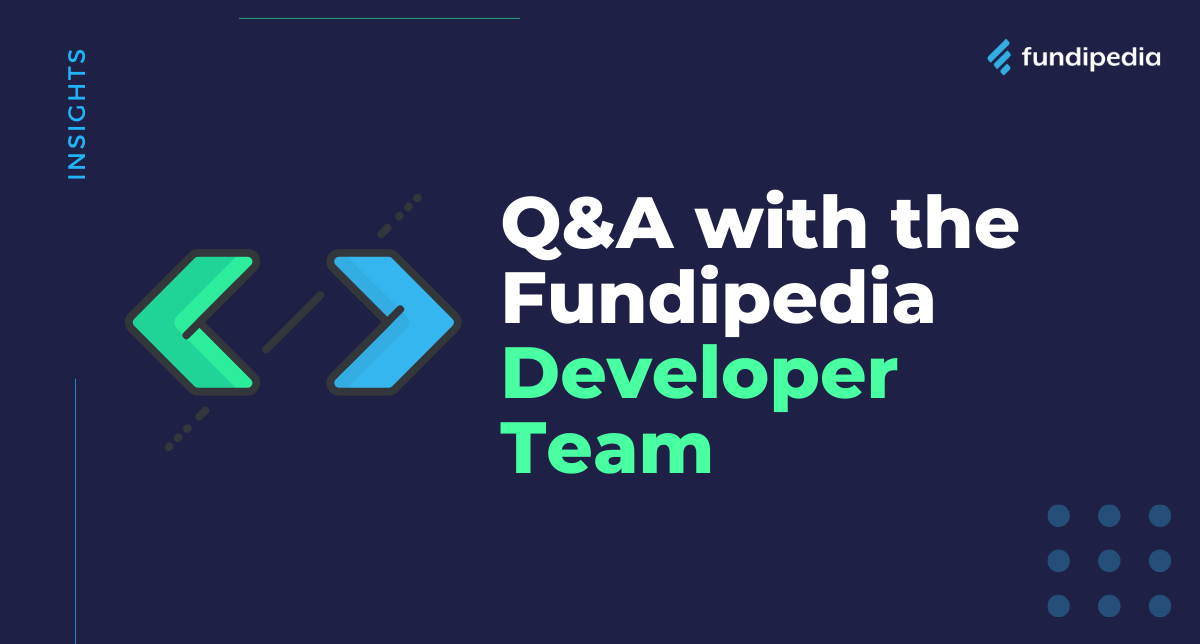 We recently spoke to Senior Software Developer Steven Day about his experience of working at Fundipedia for over 10 years.

You’ve worked at Fundipedia for over a decade – why did you join the company and what keeps you here?

I started working at Fundipedia as an apprentice after I left college and had no real commercial or technical experience. My initial meeting with Simon and Dean was super relaxed and they were both very welcoming which is exactly what I was looking for in my first role. As I finished my apprenticeship and was offered a full-time position it never crossed my mind to look elsewhere. Simon, Dean and the team had helped me grow not only professionally but also as a person and the relationships I made during the apprenticeship didn’t seem like the kind that would be easily found elsewhere. Over the years I’ve seen constant growth at the company and even now with the number of staff we have, that same culture remains. My job is a lot easier knowing that I enjoy the company of the people I work with.

How do your career aspirations align with Fundipedia’s mission?

When I started working at Fundipedia we were a very small team, and the goal was always to grow the business as much as possible. The growth we’ve seen over the years has been incredible and I still think there’s a lot more room to grow. I’ve spent 14 years working here so I’m fully invested in seeing Fundipedia succeed and will do everything I can to help achieve that.

What is your greatest strength as a developer?

My apprenticeship, naturally, had me working in all areas of the business, not just development so this led to me experiencing certain aspects of the software development lifecycle that some other developers may be shielded from. Over the years I’ve been responsible for things like first line support, project management and client relations which has given me a broader perspective on the process as a whole.

What is your greatest weakness as a developer?

I tend to stress over the little things. If I’m running a script I know I’ve run a million times in the past, I’ll still get nervous about it failing or causing more issues. I then have to go over the script and double check it’s all in order.

How do you keep up with the latest trends and advances in this field?

I follow several tech blogs and twitter accounts that do a good job of providing high level goings on in the development world. We’ve also got a good team of developers at Fundi who share relevant content in our dedicated developer channel in Teams.

If someone just starting out in their career as a developer were to ask you for some tips as to how to get the most out of the role, what advice would you give them?

It would definitely be to not be scared of asking questions. Some of the best lessons I received were from fellow developers explaining how or why something works the way it does. You may find your answer on Google but without knowing why it’s the answer you’re not really any further forward.

Technical skills are, of course, key to being a good developer? What other skills do you need to succeed in your role?

Being receptive to other people’s ideas and opinions. Every developer has their own ideas about how something should be done and sometimes, for varying reasons, they aren’t always the best approach. Being able to sit down and openly discuss your options with other developers will offer different perspectives and allow you to find the best one. Similarly, when other developers review your code and request changes, it’s not personal, taking the time to understand why they are requesting these changes can provide a new insight to the task at hand.

Tell me about a time you developed a feature for a user and, once delivered, it wasn’t what they wanted. Where was the disconnect, and what did you learn from this experience?

After a development project is complete there is always a period of UAT, and the client feedback can come at you quite fast. I’ve been in situations where I’ve received what I assumed to be quite simple change requests from a client but after making the changes and releasing them for review have found that the client was talking about something completely different. It’s very easy for things to be taken differently on the back of a meeting. I make sure to always follow up with written confirmation via email on what exactly is being changed and have the client sign off on this before any work is carried out.

Technology is a huge part of your professional life but what role does technology play in your non-work life?

I’m all aboard the smart home train, be it doorbells, lights, even my house alarm, anything I can control from my phone or with my voice.

Can you give an example of an App/programme that people use all the time that you could make better with some development work?

This is quite a contentious issue, but I do believe that we need some form of verification for social media apps. We’re seeing more and more online abuse and spreading of misinformation and there are no real consequences to this. Accounts may get banned but the people behind them can just create new accounts without any barriers and start the cycle again. Social media is so powerful and has so many positive aspects but it’s also very toxic and this needs to be stopped sooner rather than later.

Interested in working at Fundipedia? Take a look at our job openings and see if there is something right for you!