Why smart asset managers are partnering with specialist fintechs 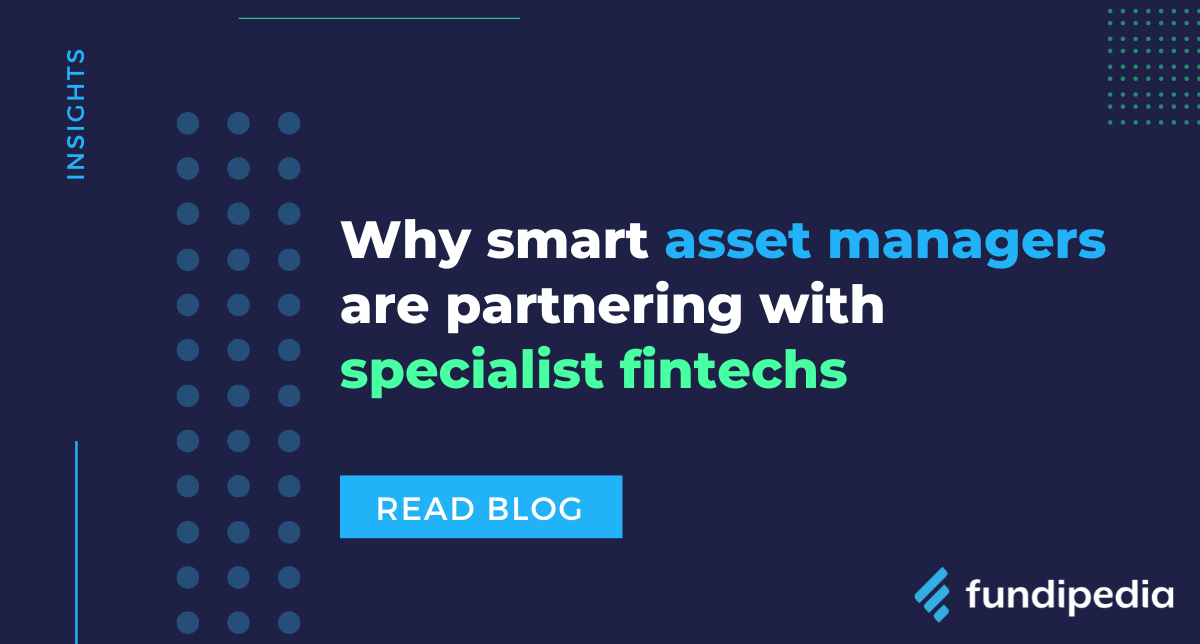 To expand data capabilities — and 95% of asset managers think this will be critical to their survival moving forward — working with one of the large, incumbent data firms might seem like the logical way to go.

For close to 40 years, the likes of Morningstar, Bloomberg, and Refinitiv have been asset managers’ go-to technology partners. They have the depth of expertise — plus unparalleled resources — that all but guarantee any business transformation project, no matter how complex, will be a resounding success.

It sounds counter-intuitive, but while these data firms undoubtedly have compelling advantages, the way they’re set up and operate mean they’re not always the safe bet you’d think they are.

Here’s why partnering with a specialised fintech platform may be the better strategy in the long term.

We live in an age of specialisation

When many incumbent data firms started out in the 1980s, deploying technology was a very different proposition to what it is today.

Alongside skilled staff, you needed racks of servers, monolithic software, and boatloads of human intervention. So, because the CapEx and OpEx costs were huge, it was more cost-effective to work with a firm that could offer you a one-stop-shop.

Similarly, these incumbent companies could only be financially viable if their offering had broad appeal.

Today those costs are no longer an issue. The as-a-service industry has made it possible for modern day technologists to spin up powerful, cloud-based hosting, and create products on them using modern software frameworks faster, and at a fraction of the price.

At the same time, asset managers’ needs have also changed.

Not only are they ever more reliant on data, but their requirements have become increasingly complex. When that happens, a specialised fintech is much more likely to have that expertise than a firm with a broad offering.

No legacy, no problem

In-depth expertise aside, the most compelling advantage of working with a specialist fintech company is that they’re not constrained by legacy technologies. Fintechs use modern digital infrastructure like Microsoft Azure or AWS. As a result, they can build products that are more flexible, more reliable, and more secure.

By contrast, because many incumbent data firms started out at a time when the landscapes were different, they often don’t have these capabilities.

Legacy technologies typically provide both them and their clients with critical functionality. They can’t flick a switch and migrate to modern alternatives.  We often hear about mission critical legacy software that is, at heart, a mainframe with a wrapper of APIs around it — a totally unmanageable Frankenstein.

The problem is that, because legacy technology becomes costlier to maintain and more complex to untangle over time, the issue becomes self-perpetuating. With the lion’s share of IT budgets — an often repeated statistic puts this at 80% — going towards patching and maintaining legacy technologies, there’s less money to invest in research, development, and modern infrastructure. In turn, this makes it harder to recruit people who know their way around new technologies, and so a technology problem becomes a skills and people problem.

Of course, we’re not saying asset managers should work with any new, untested providers. Choosing the right vendor is critical to define a product that actually works.

Without taking anything away from what these firms can do, they’ve likely racked up a considerable technology debt which might impact results. Their operational models and processes will be just as archaic, which is another way of saying, slow and unable to adapt to your needs.

JP Morgan’s chairman and CEO Jamie Dimon recalls bureaucracy being described to him as ‘the necessary outcome of complex businesses operating in complex international and regulatory environments.’

In other words, it’s the inevitable consequence of growing bigger.

This may well be true. But, when it comes to deploying new technology it’s extremely problematic.

For one, added bureaucracy means added costs. To put it more bluntly, hiring a large firm often means you’ll have to pay a hefty premium to cover their large overhead.  At Fundipedia, for instance, we recently took over a project that was being carried out by an incumbent, and delivered a more powerful, more flexible solution for one-third of the price.

More importantly, both technology and the asset management industry’s requirements are constantly evolving. Say a project took several years to develop a solution, chances are it may be — or close to being — obsolete by the time it launches. Which means all the time, effort, and investment will have been for nothing.

And — as countless firms have learned the hard way — when there are issues  moving in to fix them fast is of vital importance. Specialised fintechs are smaller and more agile, they can deploy new technology in weeks or months, not years. At Fundipedia, for instance, we typically work in sprints — short, time-boxed periods in which we complete a set amount of work.

Breaking down the project into several milestones has three key benefits.

But two years, two missed deadlines, and $32 million (around £27.4 million) in fees later, Hertz had a website that was neither complete, nor fit for purpose.

The moral of the story is simple: large firms aren’t necessarily a safe pair of hands. A smaller, specialised firm might seem like the riskier option on paper, but their niche expertise and leaner operating model could be the difference between failure and success.

Looking to enhance your data capabilities?

At Fundipedia, we’ve created a powerful, scalable, and highly customizeable data management platform you can start using right out of the box.