Another year of work from anywhere 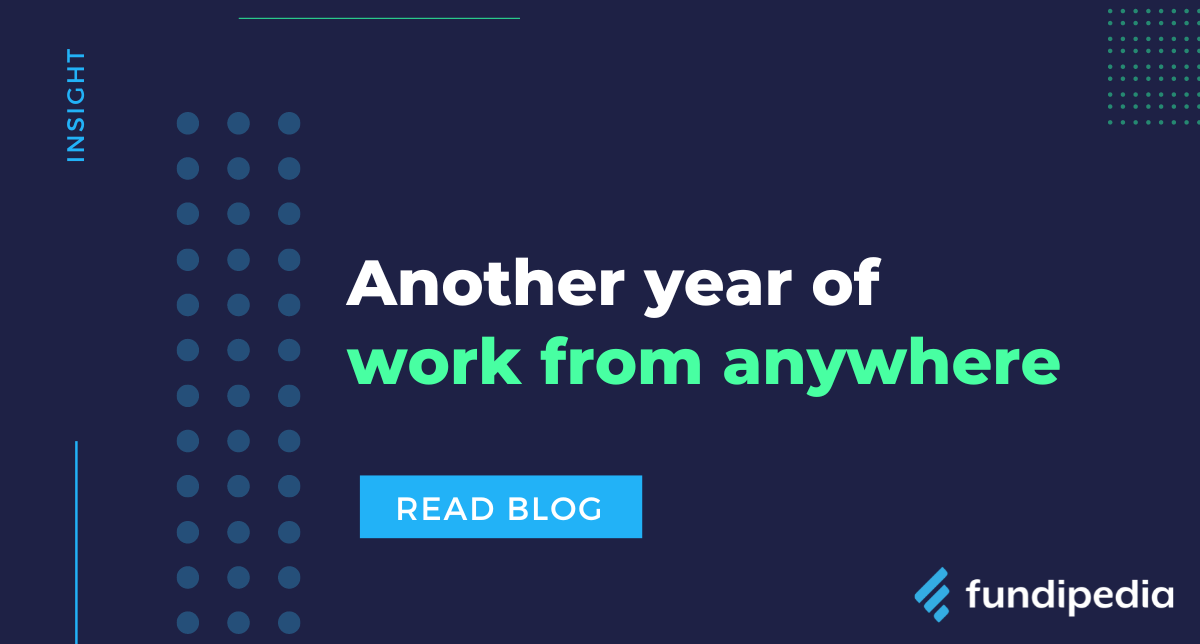 In April of last year, over 2 years since the Coronavirus pandemic began, Deloitte – one of the world’s largest accountancy and consulting firms – decided to significantly reduce its office space in the capital.

Abandoning two buildings in London totaling 250,000 sq ft, and leaving just two remaining sites with 485,000 sq ft, they appear to be leading the way in promoting a hybrid working environment.

And they are not alone.

As of September 2022, 37 percent of workers in Great Britain advised that they had worked from home at some point in the previous seven days. Sectors such as information and communication, scientific and technical, and education all demonstrated big increases in their plans to adopt home working as a permanent business model.

We conducted a survey of Fundipedia employees to discover the impact this new way of working is having on their lives and the business in general.

Working from home, on a full-time or hybrid basis, was present before the pandemic more than previously appreciated. In January 2020 around 6% of workers in the UK were permanently working from home, whilst around 12% said they had worked from home at certain points during the week.

The pandemic changed that quite dramatically and, by April 2020, 46% of people were working from home in some capacity.

By April 2021 85% of employees that were working from home wanted to continue in a ‘hybrid’ approach of both home and office working going forward.

What we saw at Fundipedia was a very similar trend.

When surveyed this year, 74% of our employees said they were very satisfied with their work-from-home arrangement and found that it had a number of positive effects on their life. 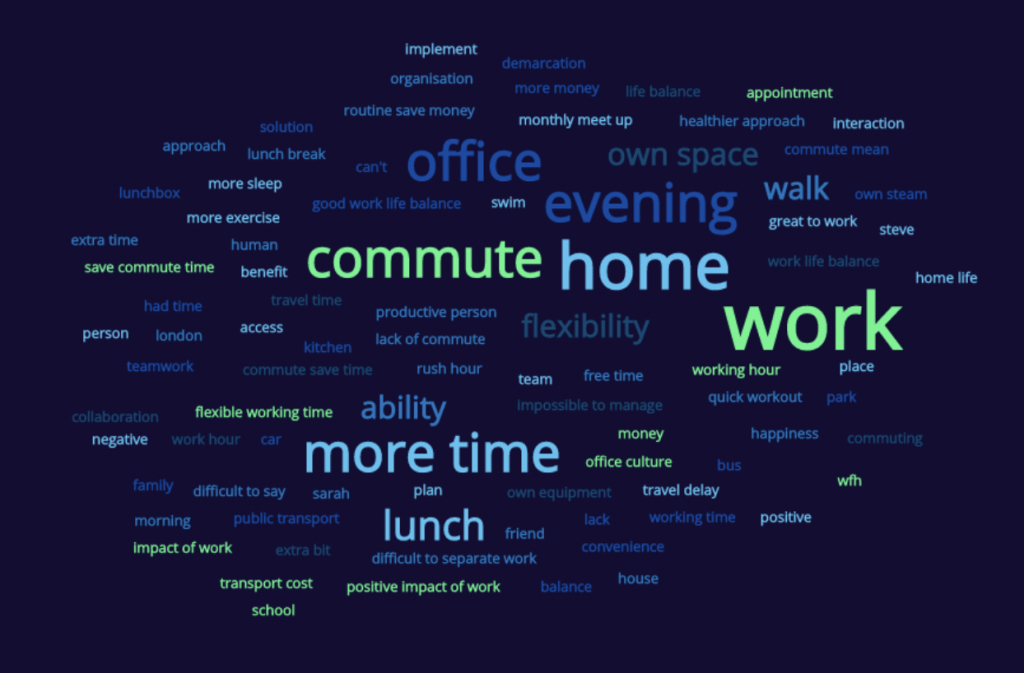 Not only was there a reported better work/life balance, with 84% saying that there had been a very or somewhat positive shift in this area, but 79% of respondents also said they felt optimistic about continuing to work in this way.

That isn’t to say that everything is positive for everyone.

The most common negative comments we heard about working from home, which fairly accurately mimics the feeling of the population in general, were that it can be difficult to unplug from work and, probably the biggest challenge – missing office culture.

In fact 3 of the top 4 answers when we asked our employees what challenges they were facing when working from home, were related to office culture – ‘maintaining a good relationship with co-workers’, ‘communication with co-workers’, and ‘social isolation’.

Overall, however, employees here and all over the country are enjoying the flexibility and extra time from not having to commute. 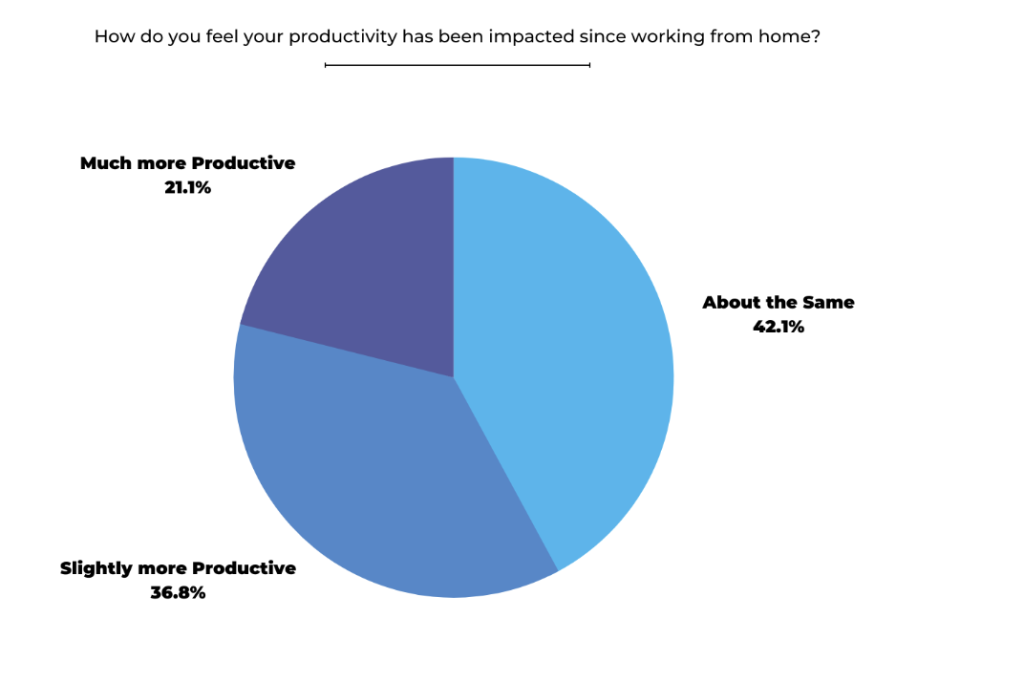 Now, we hear you saying, ‘well obviously employees aren’t going to admit to being less productive’, but the above stats aren’t too dissimilar from what employers are seeing too.

When asked about increased home/hybrid working in October/November 2021, 41% of employers said it had increased productivity, 18% said it has decreased, leaving 41% saying it was about the same.

In the past employers might have feared that in the comfort of their own homes, employees may start to slack and the overall productivity of their workforce would diminish or become erratic. The truth is that employees can be trusted to meet their work commitments and stick to a good routine without being in the office. 63% of our employees said they keep to a regular work schedule every day, with 32% saying they do most days. And when you consider that 95% of our employees say they don’t feel like our clients have experienced any negative impact because of hybrid working, it appears that productivity is not an issue employers or clients have to worry about.

The Future of Work From Home

Not everyone favours working from home in some capacity as the new normal. Once the major Covid restrictions were permanently lifted, some companies were desperate to get their employees back into the office on as permanent a basis as possible.

18-24 year-olds are the keenest to get back to the office, primarily and understandably to improve the social and collaborative aspects of work. On the opposite end of the spectrum, 55+ year old are the group most likely to want to work from home on a more permanent basis.

Employees now increasingly see the flexibility that working from home brings as a right rather than a perk, enjoying the freedom that flexibility allows. 79% of our surveyed employees are overwhelmingly optimistic about the future of working from home which tracks with the feeling of the wider surveyed workforce, most of whom are eager to continue working in some hybrid capacity.

So, despite the conundrum, many employers have about how to provide a workspace that suits all of their employees working needs, they are predominantly keen to keep hybrid working on the table to keep their workforce happy. They are also aware that they risk losing talent if they don’t.

The key word we have seen from our employees, which seems to mimic the general consensus from the wider workforce, is flexibility. 2020 was a litmus test for whether the technology we have today could fully support working from home – and it largely did. With the logistics in place, and productivity not suffering, employees want the freedom to work from wherever they feel most comfortable. It’s going to be interesting to see how the workspace of the future adapts to a hybrid working environment.

If Fundipedia sounds like somewhere you would want to work take a look at the roles we currently have available.